In partnership with DigiPen Technical Institute, PACE is proud to announce the launch of a fall initiative for youth interested in exploring the arts in tech!

Techtober is a live-in-person symposium series that will take place on October 1st, 8th, and 15th on the DigiPen Campus. Each moderated conversation will feature professionals who will speak about their experiences in the field, followed by an interactive demonstration. Explored topics will include: Work in Voice Over, Arts Direction, Sound Design, and Psychology of Avatar Creation.

Moderator Camille Leganza will interview renowned voice-over artists Ellen McLain and John Lowrie.  A Q & A session will open the conversation to the audience for the last 30 minutes.

This symposium will be moderated by Camille Leganza. Camille Leganza (she/her) is currently a Recruiter at Netflix Animation Studios for roles in the Adult Animation space. A lifelong fan of animated films and television shows, she is forever thankful to have started her career in animation as an intern on “The Iron Giant.” Her film credits include “The Incredibles,” “Megamind,” “The Secret of Kells,” and “Rise of the Guardians.” She has a wealth of international production experience, having worked globally on feature films at DreamWorks and Cartoon Saloon, and has also consulted on creative production processes for Amazon. Prior to joining Netflix in 2020, Camille was an International Co-development Producer at Microsoft on the AAA game, Halo: Infinite.

Ellen McLain, best known for GLaDOS, has called Seattle home for over thirty years. The Pacific Northwest has nurtured her career in Opera, Music Theater, Voice Over, Film, and … Science.

Ellen’s many roles have ranged from Mimi in LA BOHEME to Linda Loman in DEATH OF A SALESMAN.  Her work in the Video Game art form has taken a varied and surprising path from The Administrator in TEAM FORTRESS 2 to Combine Over-watch in HALF-LIFE 2 to the passive-aggressive computer, GLaDOS, in Valve's PORTAL series, singing songs such as Jonathan Coulton's STILL ALIVE and Mike Morasky's THE TURRET OPERA. This work led to Ellen being asked by Guillermo del Toro to voice Gipsy Danger in PACIFIC RIM and Gipsy Avenger in Pacific Rim 2.  She also had the distinct joy to be cast as Lisa in Arthur Allen’s Gay Pride film, WINNING DAD, and as The Fairy Godmother in Synthetic PictureHaus’ irreverent comedy series, WISH IT INC.

Ellen is most amazed and proud of her work as NOTGLaDOS: Electromagnetic Spectrum The Musical and NOTGLaDOS: Fusion vs. Fission for NASA. McLain has won awards from the Metropolitan Opera National Council Auditions and The National Institute for Music Theater. She has received the AIAS Interactive Achievement Award for Outstanding Achievement in Character Performance for GLaDOS and the Spike Video Game Award for Best Performance by a Human Female for PORTAL 2.  Her work with the stellar cast of LEGO DIMENSIONS received the BTVA People's Choice Voice Acting Award and, for her work as a terrified grandmother, she received the 48FILM Festival Best Actress Award for Horror short, SARAH.

John Patrick Lowrie, co-winner of the Best Script for an Audio Drama at the 2015 Moondance International Film Festival and winner of the Best Audio Drama Actor award and Best Audio Drama Adaptation Award at the 2014 Moondance International Film Festival, is the voice of the Sniper in TF2; Pudge, Storm Spirit, Doom, Earthshaker, Shadow Fiend, Ancient Apparition and Dark Seer in DOTA2, Balaram in Lord of the Rings: War in the North, Sword Control in Halo:Reach, Commissioner Kinsler in Halo:ODST, Warden in Infamous, Harold Keegan in F.E.A.R.2: Project Origin, Odessa Cubbage and Citizens in Half-Life2, Agent Gray in The Matrix Online, Hermes Haight and Sergei in The Suffering, Bruno Lawrie in NOLF and NOLF2, Tammany in Police Quest: SWAT2, the narrator in Total Annihilation as well as characters in many other video games and the voice of The International, the world championships of DotA2.  He lives in Seattle with his wife of 35 years, Ellen McLain, the voice of GLaDOS in the Portal games.  He has worked as a professional performer all his life, from guitarist and composer to actor, director, conductor, and author.  His first novel, Dancing With Eternity, won the Foreword Firsts Award for best debut fiction in 2011.  Dancing With Eternity was released as an audiobook in June of 2014.

In their latest video game, The Church In The Darkness, released in 2018, he not only voices the character Isaac Walker, he wrote five original songs for the game and arranged five more.

Intended for youth age 14+, Techtober promises to be the event to spark interest in youth wanting to level up their understanding of employment opportunities.

All ages welcome.
Tickets are non-refundable. 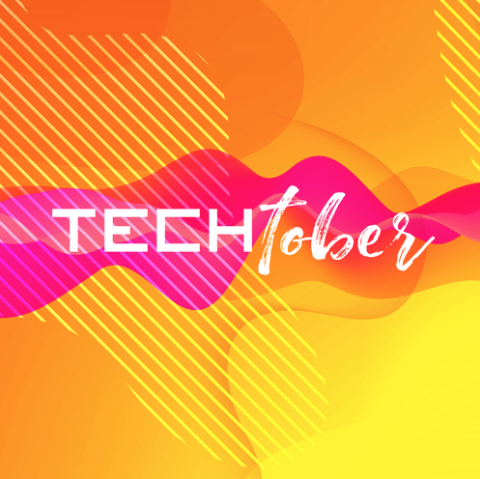