Online tickets-sales for this show are closed at this time. If tickets are provided at the door, arrive at the venue before the show.
Elevate Unity Benefit Concerts presents Jazz & Soul Super Band Side Moves + Special Guests

Artsit website: Side Moves
Side Moves is a project that began as a jam session in a basement. After a few jams, members soon realized they should take this group to the next level. Dedicated to Funk, Side Moves performs a wide variety of today's funk hits coupled with classic funk music. No matter a slow or in-your-face funk style, this group will make you want to dance!
Gary Lomprey (Guitar): Gary started playing guitar at age 10 and was soon playing semi-pro gigs at age 15. He has played professionally and semi-professionally ever since. Gary worked as a studio and touring musician in Brasil and South America for 13 years and has played in several popular bands in the Portland area. Gary is one of the most versatile guitarists in Portland area and employs a wide variety of styles including Jazz, Funk, Fusion, Rock, Blues and Brazilian Jazz.
Chris Ingold (The Kit): Chris Ingold was born and raised in New Orleans, LA and started playing multiple instruments since he was 11 years old. He attended NOCCA (New Orleans Center for Creative Arts) studying jazz guitar, but eventually found his true calling behind the drumset after moving to Portland in the aftermath of Hurricane Katrina. He has called Portland home since 2005 and has played with various bands doing funk, brass band, jam band, jazz, and rock music.
Cameron Formanczyk (Trumpet): Cameron Formanczyk is a Portland-based trumpet player holding two degrees from the University of Idaho. After receiving his trumpet performance degree as well as a degree in music education with a jazz minor, he went to work on cruise ships as a theater musician. Within the last couple of years, he has performed with Latin Grammy award winner Albita onboard the NCL Bliss, was hired to record trumpet parts for Norwegian Cruise Line pre-recorded onboard shows and has been playing lead trumpet in the Vanport Big Band. He has recently discovered funk and since joining Sidemoves he has fully submersed himself in the genre.
David Kim (Keys, Organ): Born and raised in Portland, Oregon, David Kim is a Classical-turned-Jazz pianist that is attracted by complex harmonies and funky grooves that make even those with lead shoes want to dance. Inspired to play piano by his mother, David attended Michigan’s Interlochen Arts Academy and Houston’s High School for the Performing Arts. At the Moores School of Music in University of Houston was where he discovered Jazz. After an illustrious career performing Classical music, he began exploring jazz and funk music while doing a stint in Los Angeles. Since moving back to Portland, David has been devoted to performing music in the style of Jazz, Funk & Soul.
Malcolm Lewis (Saxophone): A native to the Northwest, Malcolm Lewis began his saxophone career in NE Portland at a young age by joining a community band called the Cultural Recreation Band under the direction of Greg McKelvey, Ronnie Harrison, and the late Thara Memory. Growing up, Malcolm studied jazz and funk but soon branched out into almost all genres of music. He has had the honor of playing with a plethora of talented musicians, opening up for and being a part of several bands that have toured all over the country. Malcolm continues to play and bring music to the people. 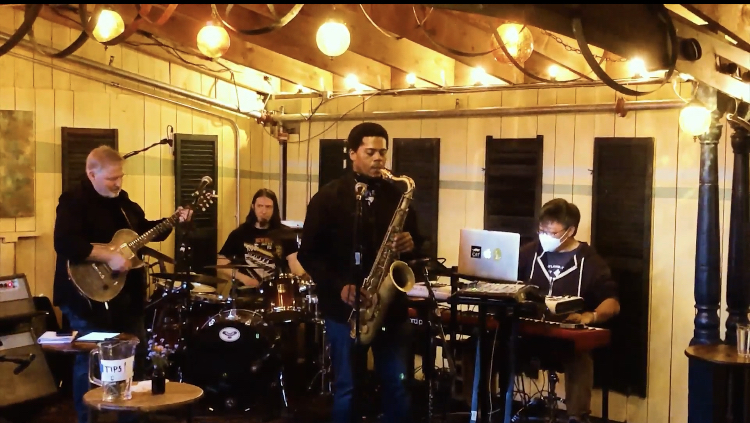